Galveston Shipmates: A Call to Action

The U.S. House of Representatives just passed a piece of legislation that would allow shipmates who served aboard the Galveston while in Vietnam waters and are suffering from diseases associated with Agent Orange exposure to apply for benefits.  (for more information on this issue, click here). The next step to becoming Law requires U.S. Senate approval.  All shipmates can help make this Law by contacting your Senator and requesting their support.  A direct email link to your Senator can be found by clicking here and following these steps:
USS Galveston Shipmates Association
Bob Rank BM3 1966-68

The above post was copied from an all hands email dated 5/21/16 -- after which an email was received from Shipmate,  Rick Nassif SM2  "The Galloping Gal" '65-'67, with what I believe is an even better message for your Senator:

I sent the following to my Senators from California:

An amendment added to the House Military Construction and Veterans Affairs funding bill would require the department to presume these veterans were exposed to the toxic herbicide and provide health care and compensation if they are sick as a result.
Advocacy groups and legislators say a VA policy that excludes bays and harbors from the definition of “inland” is unfair, and, they add, studies indicate that service members may have been exposed when the ships they were assigned to used distilled contaminated sea water for bathing and drinking.
“These personnel were heavily exposed to this toxin through shipboard water systems that drew Agent Orange-affected waters through filtration systems,” said retired Navy Cmdr. John Wells.

Thanks for your support, 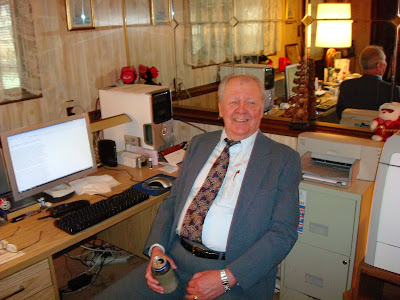 It is with great sadness that I announce that Soupy is gone.He passed away a little after 4 am (12 -22)  and we got the call from Cindy this morning around 4:45.Yesterday he had a turn for the worse. He was carrying a 103 degree fever, he doctors said that his heart was only working at 10% capacity. They reviewed his living will and in that he had stated that he did not want to be kept alive by artificial means. They removed that vent that was helping him breath and though he could not breath without it for more than 3 hours before, He lasted through the night. I will put out word of the funeral arrangements as soon as they are finalized.
All of us in the USS Galveston CLG-3 Shipmates Association owe him a debt of gratitude because without him this organization would not be what it is. Yes, he dealt us a great blow with his indiscretion near the end, but what great man hasn't had an indiscretion in his life, and he paid for it with his life as I suspected it would.I have labeled the photo above"Soupy at the helm", he is at his desk in his glory, where he did all of those things for us (his labor of love). This picture was taken just after Joanies memorial.

Taps for a Shipmate and Hometown Hero 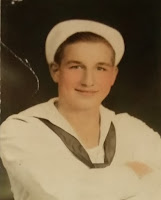 Dennis L. Rinaldi, 91, of Stroudsburg, formerly of Henryville, died April 8, at Pocono Medical Center in East Stroudsburg. He was the husband of the late Ellen (Hughes) Rinaldi who passed away Dec. 22, 2001. They were married for 56 years at the time of her death.

Dennis enlisted in the U.S. Navy in January 1941 and retired after 30 years of service. Most of the ships he served on were destroyers serving in the North Atlantic and Asiatic Pacific during World War II and the Korean Conflict. He earned the Good Conduct Medal with the first and second award with three Bronze Stars, the American Defense Medal with the Fleet Bar with a Bronze Star, the American Campaign Medal, the World War Victory Medal, the Asiatic Pacific Medal with two Bronze Stars and the Korean Conflict Medal. 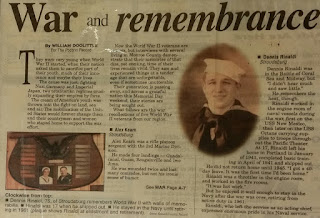 After retirement, Rinaldi worked for the Pocono Mountain School District. He was the maintenance engineer for the Holiday Inn on Route 447 in East Stroudsburg and a utility plant operator in the boiler room at East Stroudsburg University, retiring in January 1986.

He was on the fire crew at the Pocono International Race Way working the first race and several other races. He was a life member of the Stroud Township Fire Department, serving as a Lieutenant and Engineer. A member of the Four County Fireman's Association, he served with the Monroe County Police Reserves and the Monroe County Civil Defense Police. He was also a Deputy Constable and a Pennsylvania State Constable for 16 years having served in Monroe and Paradise townships.

Dennis was a life member of Police Lodge 74 in Stroudsburg, the Fraternal Order of Eagles Aerie 1106 in Stroudsburg, and VFW Post 2540 in East Stroudsburg. He was responsible for the Veterans Memorial that was placed in front of the VFW Post 2504 in 1997. Dennis was a Charter member of the Mount Bethel Portland American Legion Post 216 in Portland. He served as first and second vice commander for eight years. He was committee chairman and treasurer for the replacement of a new World War II Honor Roll in Portland and the update and replacement for the new Veterans Memorial, November 11, 1994 in Portland. Then he transferred to the George N. Kemp American Legion Post 346 in East Stroudsburg and served as post service officer sergeant at arms, post executive board and president of home association. He was a member of the Fleet Reserve Association Branch 115 in Allentown, and was active in the U.S. Navy Recruiting District Assistance Council of Stroudsburg, Pittsburgh, Philadelphia and Buffalo, N.Y.

He was a Plank Owner of the U.S. Navy Memorial Washington, DC, the USS Noa DD-841, the USS Manley DD-940 and the USS Toledo CA-133, and was a member of the Tin Can Sailors Association in Summerset, Mass. Dennis served aboard the USS Galveston CLG3 in 1959 and 1960. 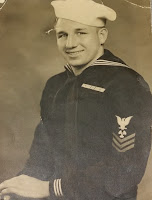 Rinaldi was an avid fisherman and hunter. He was a member of the Monroe Federation of Sportsman Club in Stroudsburg; Wyoming Wild Life Federation Club, Cheyene, Wyo.; North American Hunting Club, Pocono Paradise Hunting Club, Roseto Rod and Gun Club, Roseto; Laurel Hill Rod and Gun Club; and served as president and other committees for many years. He was a great volunteer and helped many people, he will be missed by many.

The picture at top right is of Dennis and his grand-daughter, Amber, preparing to leave for his fireman's banquet about two weeks before his peaceful passing.  Dennis was buried in this uniform: his original uniform.   A squared away sailor to the end.

We lost a good buddy and boatswain mate with the passing of Mike Almasy last week. 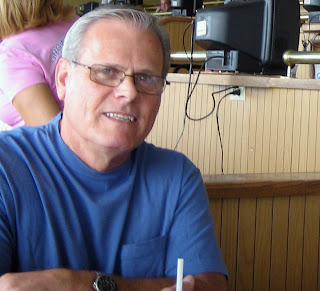 Mike and I came aboard around the same time in November 1966 when the ship, just out of the yards, brought on an almost new crew.   We were both assigned to 1st Division where he and I were among the very few boots who didn't spend most of those first few weeks, seasick.  Our division First-Class, "Jake" Jacobson, seemed to notice that and took Mike and I under his wing.  Of the new crew, we were the first to be put up and pass the Seaman 1st, and Third Class exams.
During extended periods in port, Mike and I  shared apartments (around $60 a month for a bachelor apartment shared by up to six shipmates) --- no cost was too much to get off the ship, or so we thought.  We volunteered for Vietnam duty together and received our transfer orders within a few days of each other in November 1968 both for boat duty:  Mike in Danang and me in Qui Nhon.
For a couple teenagers, those two years aboard the Gal were formative --- thousands of watches, holy stoning, chipping paint and  ice, over ten thousand  miles steamed, exotic  port-o-calls, a consecutive forty-three days at sea during/following  the Six Day War,  and ... a few beers.  Actually, our mutual liberty plan was always to go ashore, visit some local churches, have one beer,  and return to the ship.  We rarely visited any churches and never had just one beer. 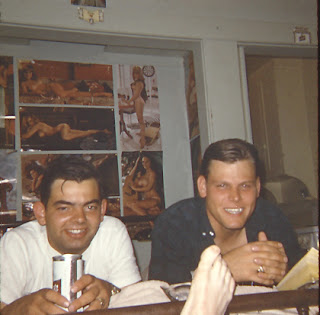 
Mike and I pretty much lost contact until the 2010 Galveston Reunion in Memphis where all was resumed.  And then again, until Pete Bindl (another 1st Div BM, buddy, roommate, Vietnam volunteer...) traveled, earlier this month, to spend time with  Mike, one last time.  Cancer had robbed Mike of his body, but not his mind.  He could smile when I told him I brought him a beer,  to watch me drink.  He could even muster the strength to add a few words (corrections) to the sea stories Pete and I spun.
Mike's wife, Shirley, is an angel.  She took the time to notify me of Mike's passing, when she could/should have been only concerned with her loss.  She fed Pete and I when we were there -- when  we all knew we should have been reducing her work load.  And she argued with me when I told her I thought Mike was lucky ---until I clarified "to have had her in his life". 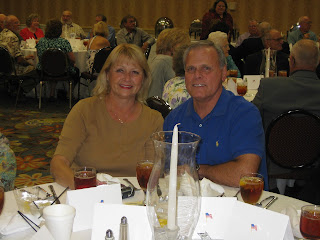 Shirley & Mike Almasy
I'm a better man for having known Mike and can only hope that someone will say the same thing about me someday. 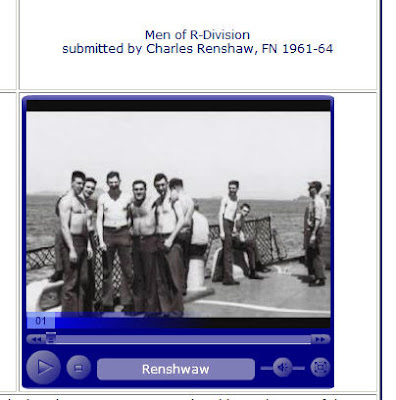 If you were aboard the Gal between 1961 and 1964, you might recognize some of the faces in a video, slide show just added to the Ships History / Video page.  The slide show was submitted by shipmate Charles Renshaw  (FN R-division 61-64)  who says it was put together by his grandson.


Before sending me the DVD containing the slide show, Charles sent Keith and me an email wondering why there hadn't been any activity on this blog since 2011.  We both sort of told him it's the shipmate's website -- not Bob & Keith's. It will only remain interesting, if the association members continue to submit photos, videos, articles of interest...


If you haven't digitized your old photos yet, it's never been easier to get it done.  Walgreens Drug Store will copy photos to a DVD  for 49 cents an image plus about $10 for the DVD.  Better yet tell your kids or grand kids that a digital record of your Navy days would make a great gift -- much better than another ______ (insert here whatever you have more than enough of already).  Then send me a copy -- I'll return it if requested.  Just email me Bob@USSGaleston.org and I'll reply with mailing instructions. 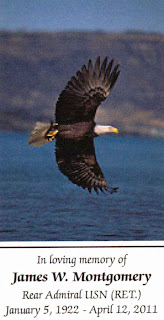 On September 15th, the last skipper of the USS Galveston CLG3, James W Montgomery, was laid to rest in Arlington National Cemetery during a ceremony befitting his national service.  Our association president, Stan Shock attended the ceremony and shared the material presented below.

Just two years ago, Rear Admiral Montgomery (Ret) was the honored speaker at the dedication ceremony for the USS Galveston Plaque at the US Navy Memorial Museum in Washington, DC. A video recording of his speech is available on this website in the History/Video section or from the following link http://ussgalveston.org/video/videopage1.htm 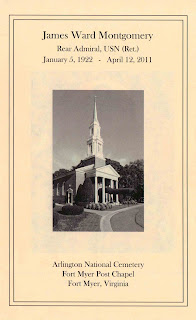 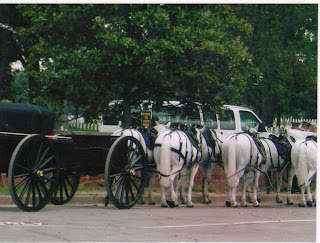 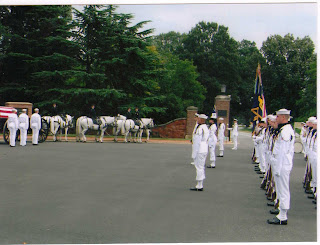 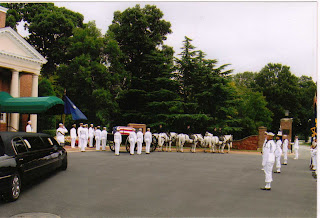 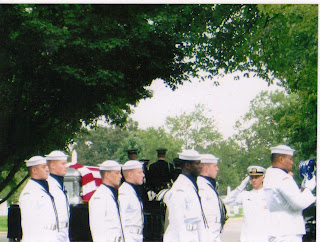 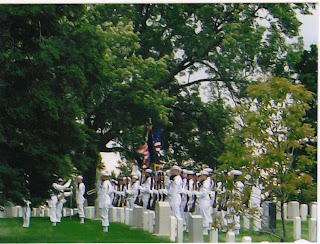 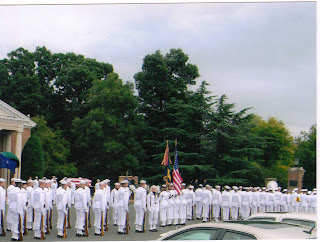 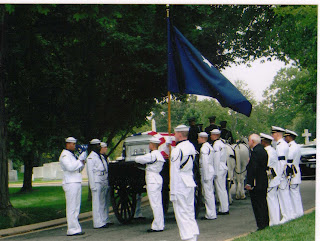 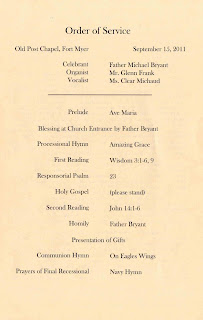 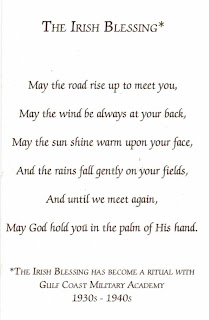 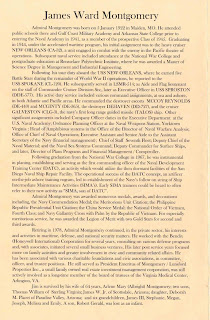 In addition to being the last Galveston CO (1969-70), Admiral Montgomery was last surviving Galveston CO.
To Captain Montgomery and all those that preceded him, the crews of the Galveston salute you,

Our shipmate, Dave Love, sent us a link to a interesting web page built by the USN having a long list of navy terms and their origin. I enjoyed reviewing the list and learned some things to boot *.

Rather than just copying the link here, I decided to copy the whole list to our website in the "Ship's History" area accessible from the home page. I figured the Navy owes us something. I also added a submission form where anyone can send additional words with origins to grow the list.

Check it out. Go to the Galveston Home Page, click on menu item Ship's History, then click anchor next to Naval Terminology.

* To boot -- term has nothing to do with footwear. The 'boot' is thought to be a derivative of the earlier old English 'bat' meaning 'good or useful'.

Finally, this picture is not my buddy Dave Love and really has nothing to do with anything. Any objections?